“Sharing happiness and promoting sustainable living amongst the masses,” Love Charity❤️Tokyo’s Hannah Ogahara and Asami Suzuki aim to start a movement across Japan.

＃What is a charity shop?

＃What are the barriers to creating charity shop culture in Japan?

“London Charity Shop 2119 – Love Charity ❤️ Tokyo”, is one of the projects selected for 100BANCH’s Garage program. Love Charity Tokyo works with the aim of spreading charity culture in Japan through charity shop fashion, which is hugely popular and deeply ingrained into everyday life in the UK.

It is clear that the charity culture in Japan and the UK has contrasting elements which is why Love Charity Tokyo have been developing a charity shop to delight the Japanese market.

Recently we’ve been exploring the idea of upcycling. Giving preloved clothes a new lease of life, altering them to make them wearable again. On the 16th February 2020, Love Charity Tokyo ran a workshop where participants could learn how to easily upcycle clothes, and discussed what the next generation can do to reduce waste and to contribute to a more sustainable society and planet.

Participants who attended the event were of various age groups and countries, which led to a lively conversation, a meeting of minds.

What is a charity shop?

What is a charity shop? 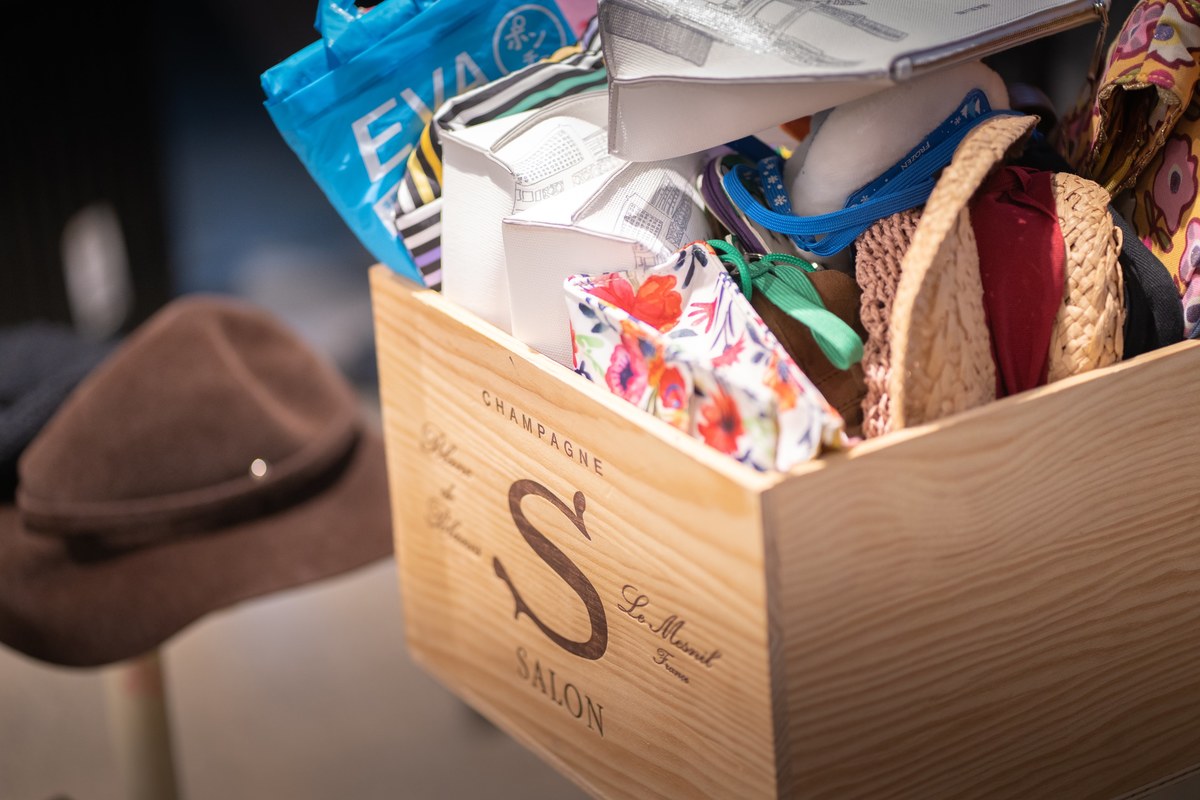 As charity shops aren’t really popular In Japan, if you’ve never seen one before, perhaps it’s easier to visualise it to look like the reuse/recycle shops in Shimokitazawa. However, the big difference is that reuse/recycle shops buy clothes, sell clothes and keep the profit, charity shops accept clothes given to them for free and the profit is donated to help others.

By introducing a charity shop system, Love Charity Tokyo will create a new charity culture, providing people with a way to help others and create a more sustainable society.

A sustainable community isn’t just made from one person’s efforts, but from the collective contributions of everyone around. Therefore, for Love Charity Tokyo’s major event at 100BANCH, instead of doing our usual pop up shop we decided to put forward the idea that rather than throwing away old clothes, what if we could turn them into something new and useful? We also held a speaker’s panel in conjunction with an upcycling workshop.

We wanted people around Shibuya to experience charity in various forms and the fun that comes with it. Tokyo is famed for it’s fashion scene, so we challenged participants to bring items that they didn’t use anymore and to make original garments and accessories by painting, patching, pattern cutting, screen printing and embroidering. 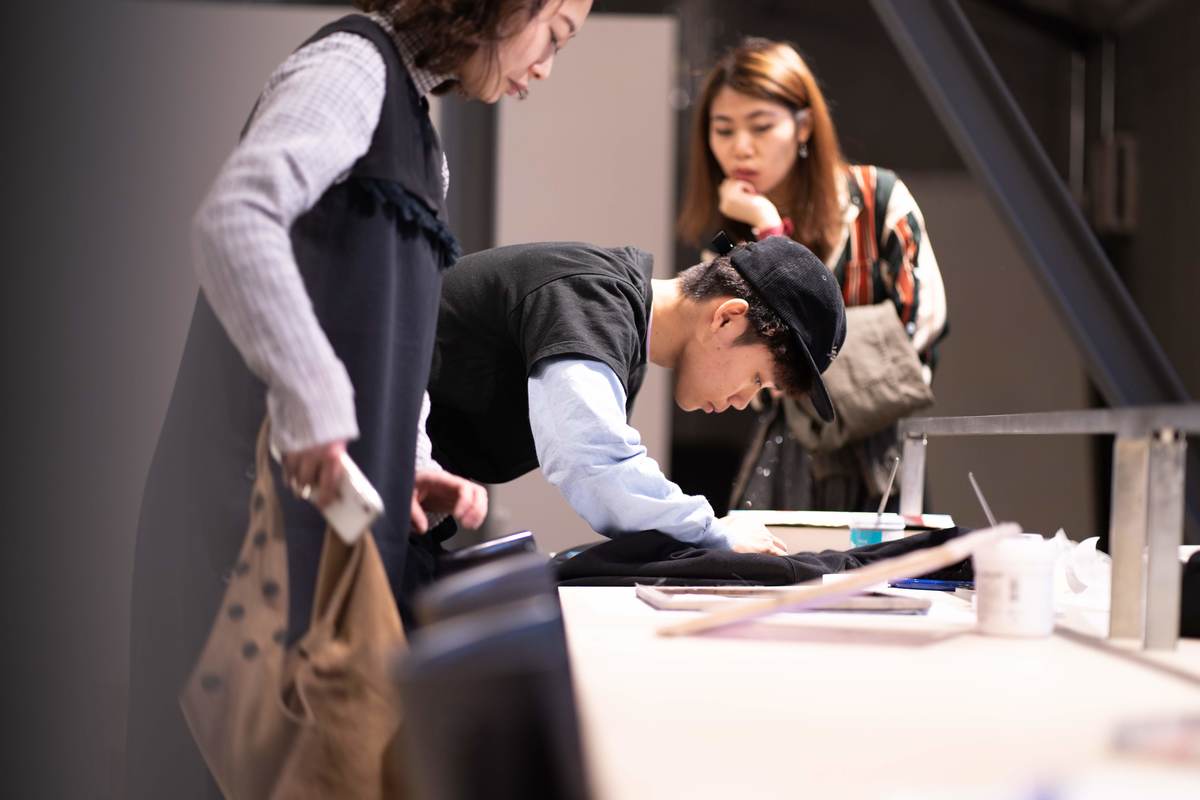 A highschool student said, “this is the first time I’ve heard of upcycling, I’m so happy that I’ve been able to make something I don’t use anymore, look like something new, something I want to wear.”

Through this workshop we got participants to reflect on what they buy and throw away. Do we really need to purchase this item? Can we use it again? If it’s poor quality, may we need to buy a new one soon? If I can’t use it, could someone else find it useful? 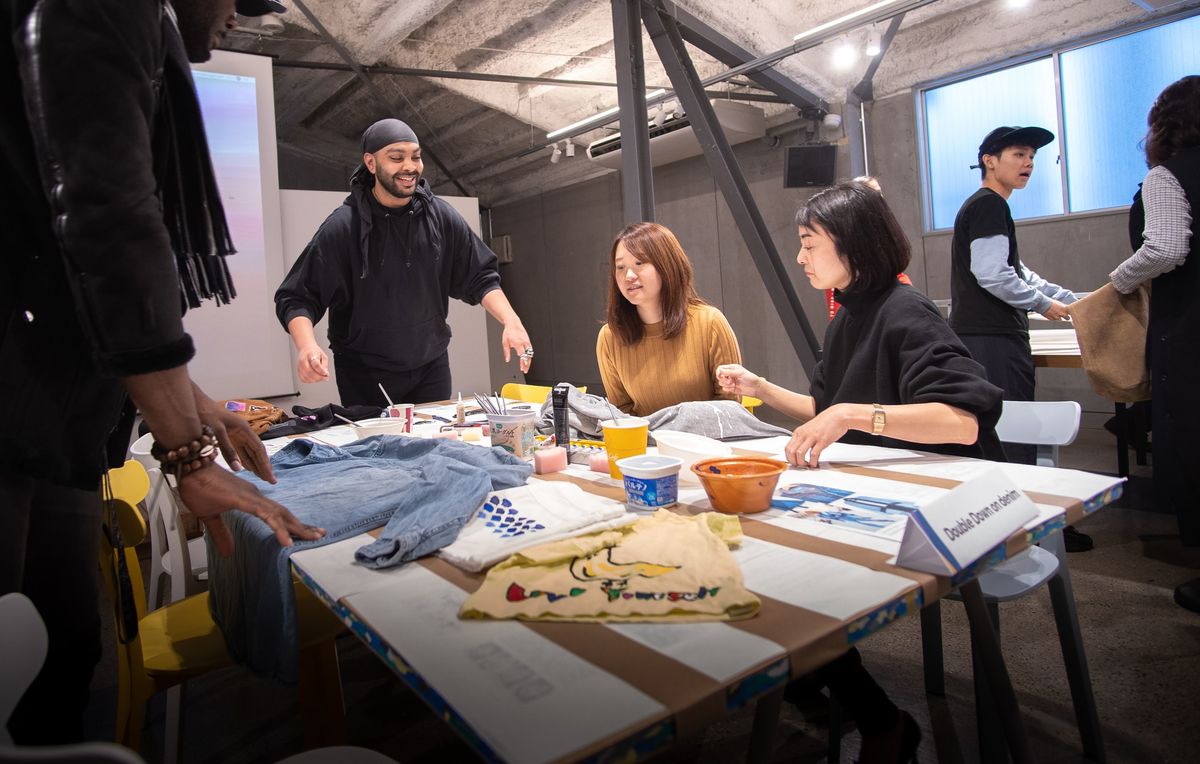 The speakers were all people who we believe are promoting sustainable living in Tokyo and who share the same values as the Love Charity Tokyo Team. The speakers included Emily Sato, Shunji Hironaka from Please Don’t Throw Your Love Away, and Atsushi Kano from Swell Plastic. Each speaker had ten minutes to speak a bit about their connection to sustainability, and each person seemed to leave a huge impact on the audience. 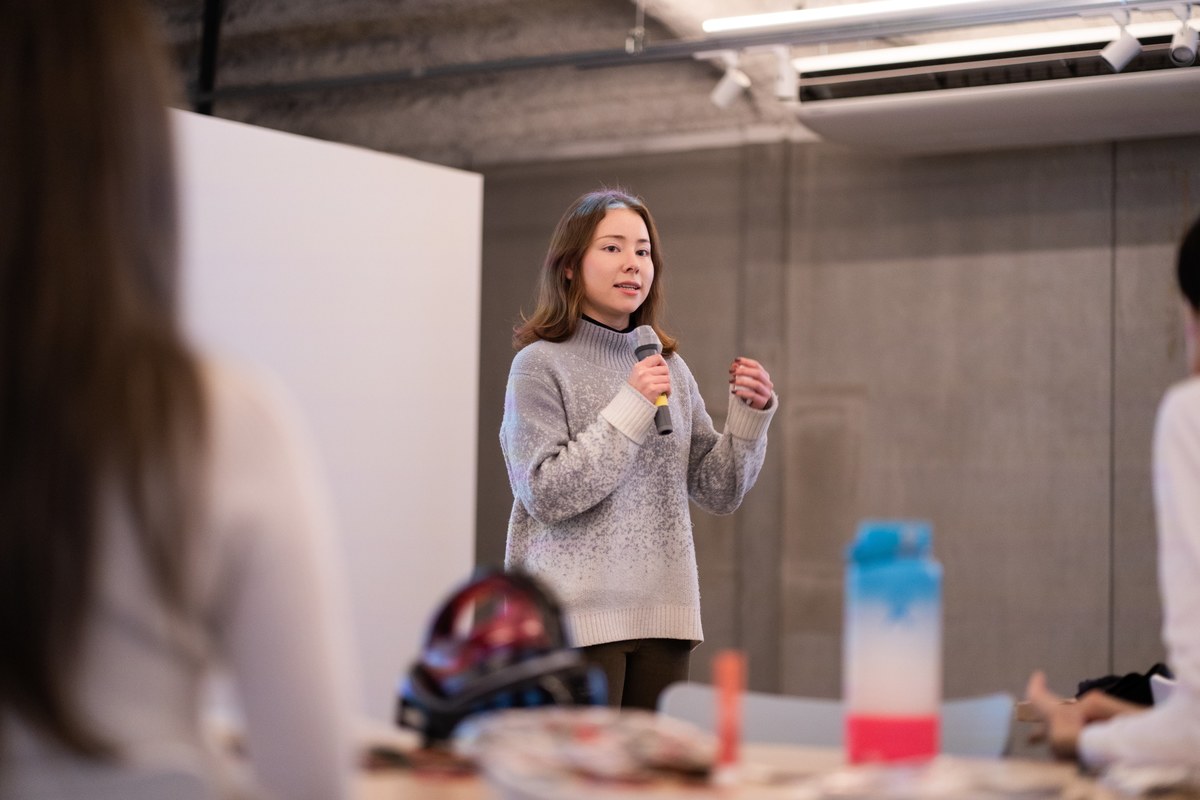 Emily spoke about how she grew up in a family who used many sustainable practices, such as making her own soap at home. While being a student though, she has participated in her university’s #FridaysForFuture group. #FridaysForFuture groups were inspired by Greta Thunberg and specifically tackle climate change issues. While Emily couldn’t talk about what her group has planned, it seems that educating other students and wider audiences about climate change was on the list. 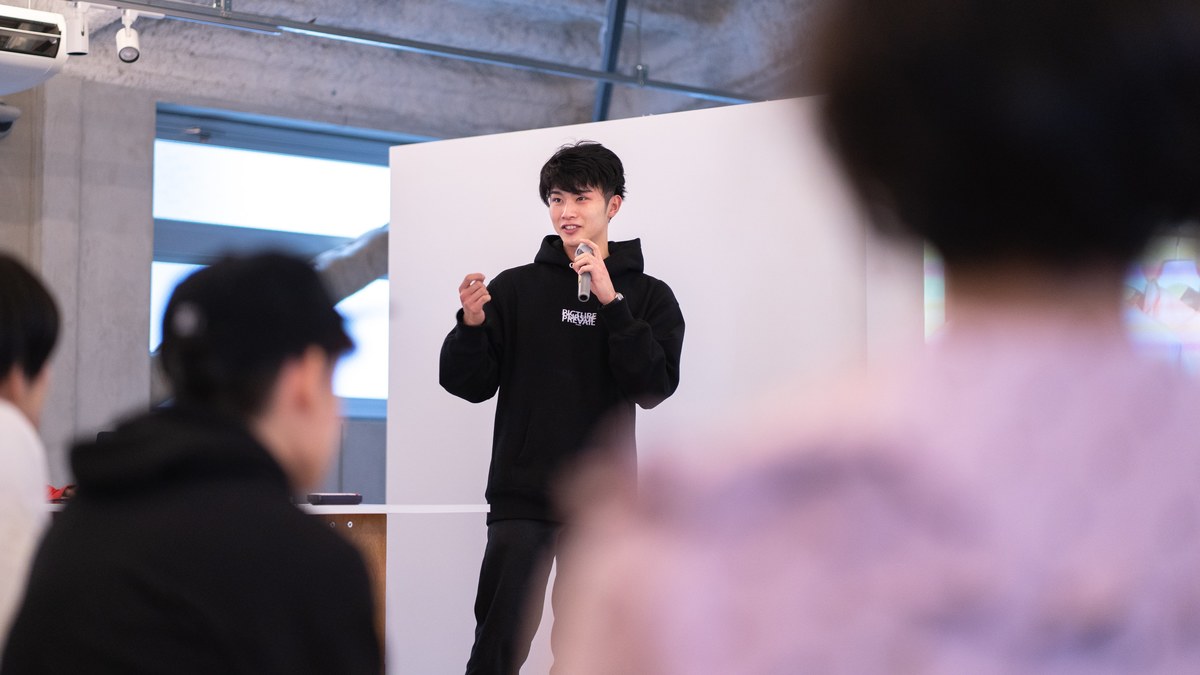 After, Shunji spoke about his own company, Please Don’t Throw your Love Away. Originally starting in LA, Shunji came to realize that there were many homeless people in LA. He saw that many homeless people had to give up their own pride just for a meal or clothing, and so he created shirts with the writing, Please Don’t Throw your Love Away on them. While it was nerve wracking at first for Shunji to give the shirts to people on the streets, he has now brought his shirts to Japan and wants to continue supporting the homeless community here. 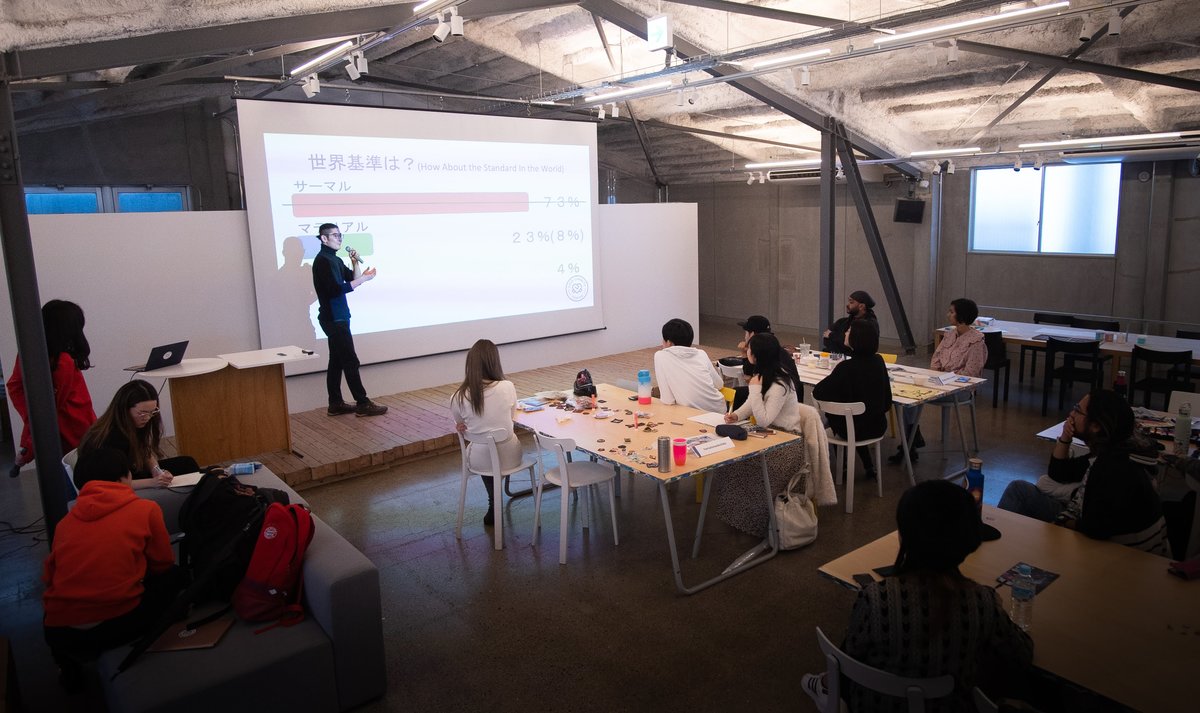 Finally, Atsushi spoke about his own company, Swell Plastic, which specializes in creating recycled PET bottle items. After Atsushi’s daughter was born, he came to realize Japan’s plastic problem. Seeing how this could affect his daughter’s future, Atsushi did his own research into Japan’s recycling policies and discovered that despite Japan’s reputation of being good at recycling, most plastic still gets burned. Now, Atsushi creates plastic creations from bowls to wallets from PET bottle caps he gets and he hopes to educate those around him about how to better protect the environment.

Ultimately, it seemed that everyone was able to get something away from the Project Upcycle Runaway event, whether it was hearing something interesting from the speakers, or being able to upcycle a stunning new piece of clothing. For the Love Charity Tokyo Team, it is important to us not to just teach people about charity shops, but to also develop a community passionate about creating a sustainable future for everyone. We hope to host more workshops that give people the chance to see their clothing in a new light and hope to continue highlighting more people in the Tokyo community.

What are the barriers to creating charity shop culture in Japan?

People said that it would be difficult for charity culture to take root in Japan due to the fact that Japan is not a Christian country. Would people understand our charity shop concept? Would they be interested in getting involved?

However, although it might not be how charity is seen in the west, there are many other things that japanese people do on a customary basis that can be seen as charitable giving. For example, it can be said that giving money at a shrine is a form of donation. Japan isn’t a cold, uncaring country at all. Whenever there is a natural disaster, people instantly come to aid; donating their time and money. Love Charity Tokyo, want to provide new, fun options to get involved. 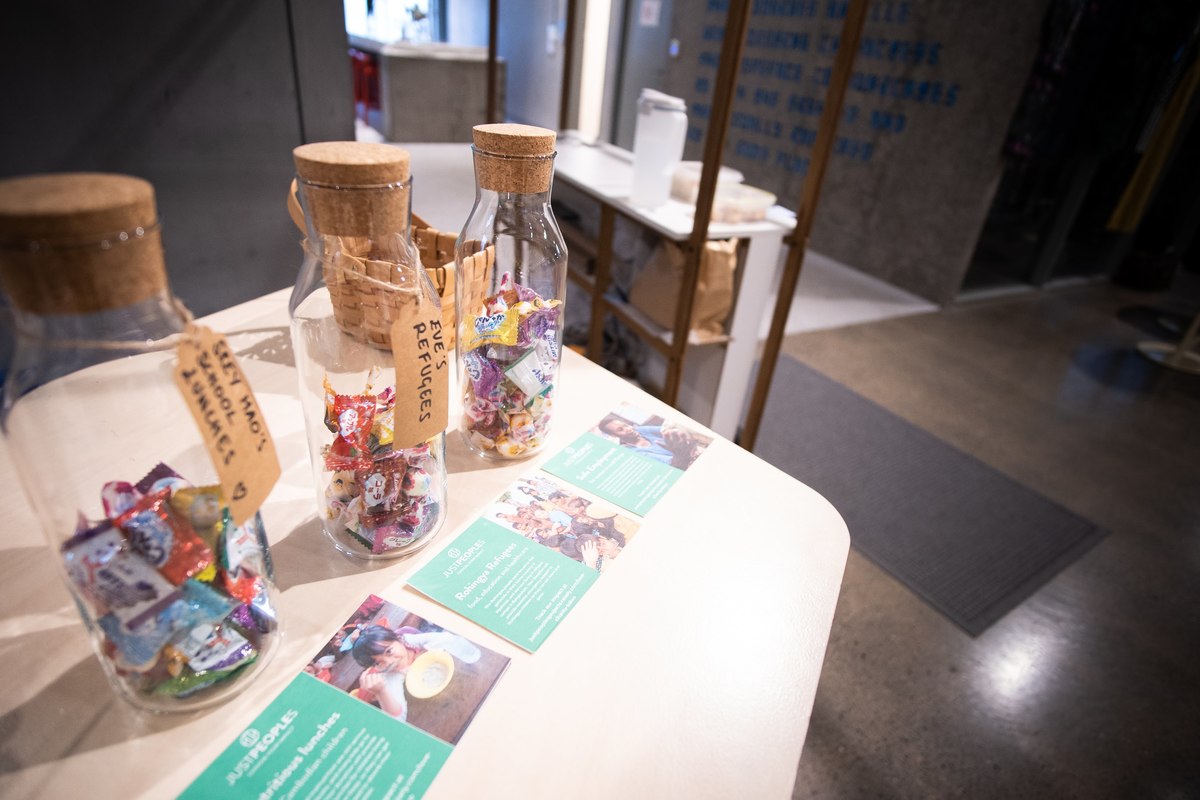 Why do we want to create a more diverse charity culture in Japan? We want to connect people, we want to empower them and let them know that with their individual actions and choices, they hold the power to make others happy.. And this in itself will also bring them happiness.

A Chemistry Graduate from University College London. Whilst working as a professional dancer, she made products for an organic cosmetics brand and taught Maths and Sciences, later starting up tutoring agency, Love Learning Tutors. Studied Japanese at Sophia University and continues to manage her British projects online.

Written by soma no base 河合志帆（しほ）

Written by Emptiness town in a handful of sand 井手尾 雪